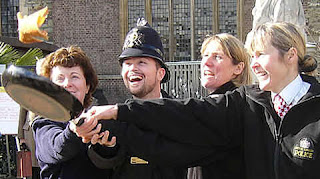 Do you like pancakes? Today is the day to eat them because today is Pancake Tuesday. The official name of this celebration is Shrove Tuesday . Traditionally, special food was eaten in the day before Lent. People had to use up rich foodstuffs such as eggs, milk, and sugar, before the fasting season of the 40 days of Lent begins. During this period of time, it was forbidden to eat any food that would give pleasure, people had to consume plainer food thus avoiding meat, dairy, or eggs.

There is an interesting activity that still takes place in many villages and towns across United Kingdom, specially in England, and it is pancake races. Participants with frying pans race through the streets tossing pancakes into the air, catching them in the pan whilst running. A perfect excuse to eat lots of them today! 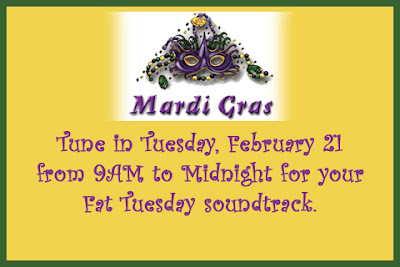 But Shrove Tuesday is better known in the United States, France and other countries as Mardi Gras, or Fat Tuesday. Different name but same tradition: eating richer, fatty foods the last night before the ritual fasting of the Lenten season, which begins on Ash Wednesday.
Its origins go back to ancient times, some time in the Second Century, during mid-February (usually February 15 according to the Julian calendar), Romans would observe what they called the Lupercalia, a circus-type festival which was, in many respects, quite similar to the present day Mardi Gras. This festival honored the Roman deity, Lupercus, a pastoral God associated with Faunus or the Satyr. When Christianity arrived in Rome, the dignitaries of the early Church decided it would be more prudent to incorporate certain aspects of such rituals into the new faith rather than attempt to abolish them altogether. This granted a Christian interpretation to the ancient custom and the Carnival became a time of abandon and merriment which peceded the Lenten period (a symbolic Christian pentinence of 40 days commencing on Ash Wednesday and ending at Easter). During this time, there would be feasting which lasted several days and participants would indulge in voluntary madness by donning masks, clothing themselves in the likeness of spectres and generally giving themselves up to Bacchus and Venus. All aspects of pleasure were considered to be allowable during the Carnival celebration and today's modern festivites are thought by some to be more reminiscent of the Roman Saturnalia rather than Lupercalia, or be linked to even earlier Pagan festivals.

You know that here, in Málaga, we have been celebrating the Carnival over the last two weekends and that the name for our particular Mardi gras is El entierro del boquerón. Again, different words for similar traditions...

Eat plenty of pancakes and boquerones before Ash Wendneday, you're still on time! 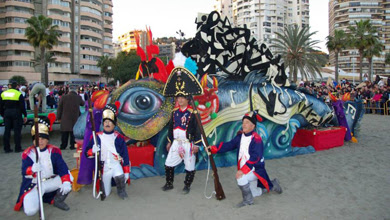