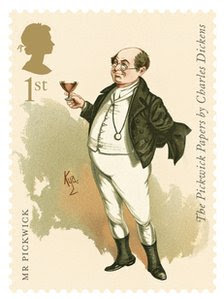 Who has never heard about these characters? We all owe them hours of joy and examples for learning about human nature.

Two hundred years ago their creator, the British writer Charles John Huffam Dickens was born. He is considered one of the greatest authors of all time and his texts have been read by millions of people since they were first published.

You may have watched a film based on one of Dicken's novels, or perhaps you have read an adapted version of it once, but if you really want to enjoy what I call LITERATURE -yes, that's it, with capital letters- then you should find youself a nice cup of tea, a confortable armchair, and a complete version of one of the texts as Dickens wrote them.

You can start with an easy and short one like A Christmas Carol. After reading it, you will be longing to find out about the other characters too.
Posted by Lola Galán at 12:36 PM