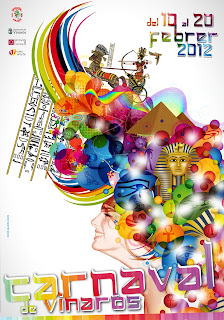 Andalusia
The Carnival of Cádiz is one of the most famous carnivals in Spain and the world, and it has been recognized (together with the Carnival of Santa Cruz de Tenerife), as  an International Tourist Interest in Spain.

Every year, during the months of January and February, a Carnival Competition is held in the Teatro Falla. 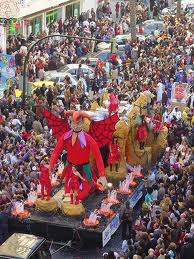 The costumes worn by the groups are often related to recent news, such as the bird flu epidemic in 2006, during which many people were disguised as chickens.
The most famous groups are the chirigotas, choirs and comparsas.

Santa Cruz and Las Palmas are, together with Cadiz, the most important cities for the carnival festival in Spain. They are very important for Spanish tourism too, and have been declared an International Tourist  Interest in 1980 by the Secretary of State for the Tourism. 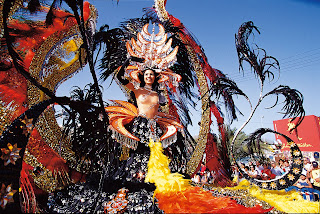 In 1987 the Cuban singer Celia Cruz, together with the orchestra Billo's Caracas Boy, performed in the "Carnival Chicharrero". More than 250,000 people were there and it was registered in the Guinness Book of Records as the largest gathering of people in an outdoor plaza to attend a concert, a record it holds today. The Carnival of Las Palmas (Gran Canaria) has a Drag Queen's gala where a jury chooses a winner.