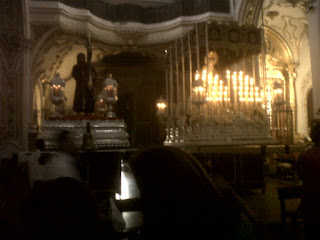 Easter is Málaga's most important festivity because a lot of people come from many countries or many places of Spain to see our processions, but rain always appears and it doesn't permit that different sculptures of Christs and Virgins can go around Málaga's streets.

From two Saturdays ago, many images have been moved so you could see them in our streets.

Palm Sunday is opened by Pollinica brotherhood. This parade is very waited by children who always wake up early. The "nazarenos" carry olive branches to celebrate Christ arrival in Jerusalén.

While Pollinica is walking around Málaga's roads, the Virgin of "Lágrimas y Favores" leaves from San Juan. Do you know you can see Antonio Banderas, a famous actor who comes from USA,  helping in this parade? He carries the "trono"!

PALM SUNDAY AFTERNOON AND NIGHT; MANY CLOUDS ARRIVE TO OUR TOWN

When Pollinica enter in its brotherhood house, "Dulce Nombre" leaves from Capuchinos. Last year, it started raining when they were in the Cathedral so they were not sure to leave. "Salutación", "Prendimiento", "Huerto" and "Salud" left too. The latest procession, "Humildad", left because it could start raining. They had to run. Rico's brotherhood house's doors were opened while this procession was passing. 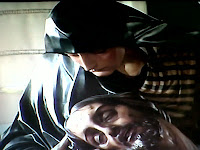 Suddenly, the sun started shinning and "Cautivo", "Estudiantes" and "Dolores del Puente" started the visit to the city center. They were lucky.

HOLY TUESDAY: IT STARTS RAINING WHILE NUEVA ESPERANZA IS LEAVING

Málaga's girlfriend, the Virgin Rocío, at 15:30 begins her journey. It's cloudy.
Meantime, in Nueva Málaga, a neighborhood of Málaga "Nueva Esperanza" starts the longest parade: it begins at 16:00 and it finishes at 4:00! But it started raining. In 2011, they had to turn around in Mármoles street. This year, they have been brave and they have completed the journey. They were also lucky.
"Penas" could leave too. The virgin's mantle is made out of flowers!
"Rescate", "Sentencia" and "Estrella" could leave too.

"Salesianos" and "Fusionadas", the slowest procession with four "tronos" left. When "fusionadas" arrived to Atarazanas, it had to wait an hour because Salesianos was late. It was a very singular moment.

Every year, the "Rico" releases a prisoner in Plaza del Obispo.

"Paloma" brotherhood gives real doves to people. This doves fly near its Virgin because people release them.

The "Sangre" is the most ancient parade. It's very famous because its Christ is very bloody.

If you see the left of "Expiración", you will enjoy with the formation of the Guardia Civil. This year, I have lived a very special moment: the Christ and the Virgin went up the first street without stopping! 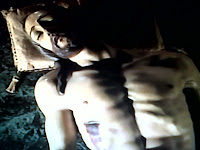 This is the best day of the week. The "legionarios" come to Málaga to accompany the parades.

The "Santa Cruz" opens this day. It is a very simple brotherhood but it is very interesting.

The "Cena" is very singular because it has the biggest "trono".

The "Viñeros" is very important too.

But the most important and waited processions are "Mena", "Misericordia", "Zamarrilla" and "Esperanza". The "legionarios" accompany them.
At 23:45, when only "Esperanza" remained in, it started  to rain. The parades who were in the street started running. "Esperanza", by second consecutive year, couldn't leave.

GOOD FRIDAY MORNING: THE CHRIST OF MENA BROKE UP

Christ has died and everybody is very sad.

The "Descendimiento" shows the descent of Christ from the cross.

"Calvario" is a very disconsolate Virgin. This parade left from Monte Calvario and when they were in Vía Dolorosa del Calvario, it started raining. It stopped at 17:15 so all the parades could leave. 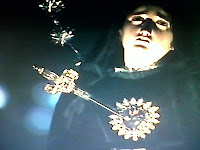 In the "Traslado", Christ is carried to the tomb.

In the "Amor", the Virgin is crying thinking about her child.

In the "Piedad", Christ has died and the Virgin is holding him.

The "Sepulcro" shows Christ's tomb. Everybody is silent and the virgin is crying.

But the most different and special procession is "Tercera Orden de Siervos de María Santísima de los Dolores (Servitas)". It is a scary parade. The "nazarenos" ask for forgiveness to the Virgin. While the procession is passing, the lights are out. We can only hear the nazarenos' laments. The Virgin is very simple but it's very scary and beautiful.

At the end of Servitas, in San Felipe Neri, all was quiet when suddenly, a dark music began to sound and a man started singing an opera. It was really creepy and many children started crying.

There is only a procession this day : "Resucitado". Christ has raised from the dead and the Virgin is very happy.
Posted by Lola Galán at 11:47 PM